The January 2022 meetings started with a first outing of "The Angel Gabriel": We like it, and have filed it away ready for next autumn. We started looking through several new pieces and refreshing our memories of some we were enjoying prior to starting our Christmas preparations. Now, Aug 2022, these new pieces are coming along nicely, including our newest pieces, the Ukrainian National Anthem, "Con Joyo" and "Summertime".
It was great to be able to play the Ukrainian National Anthem to two Ukrainian ladies who have recently moved into our area, and they clearly appreciated our efforts!
We are now finalising what to put into a future Group Concert, now fixed for 9th September 2022).
We have also agreed to change our meeting days to the first and third Wednesdays from 6 April

The December meetings were the final polishing of our Christmas pieces to bring them to "concert readiness. Sadly, Covid upsurge meant that our pre-Christmas concert was cancelled. We were, however, able to play at the Southwell U3A Christmas Party in early December, and that appeared to be well received.

10 November:
We narrowed down the "concert items", and started to prepare for our SU3A Christmas Party slot


13th & 27 October:
We had a first look at Christmas music and possible venues/events.

We had a quick refresh of our remaining "old" pieces, and a first canter through our new pieces. We agreed a partial swap between tenor/treble lines for "St Anthony Chorale", and the latest revision (v5) is now on our "Current Repertoire" page.  We discussed possible future development, including perhaps inviting other local U3A recorder groups to meet with us for a session.

Eight of us braved a warm but breezy Southwell Market Place and played for some 30 minutes for the Southwell U3A Open Day. Our efforts appeared to be well - received, and it was lovely to see Liz and David there (Thanks, Liz, for hanging onto music that was attempting to escape from the clothes pegs!).  "Giga" went surprisingly well, as did the rest of the programme.  Ian has promised us some new music for next meeting.

We had a run through the repertoire for the 15th August, and agreed the order/selection. Some anxiety about "Giga" which is still quite a challenge!

The ten of us present enjoyed a run through all of the current repertoire  in preparation for the 15th August Open Day at Southwell, and enjoyed a return to the customary refreshments at the half-time break!  We agreed some minor changes to "Giga".

14th July:
Our meeting on 14th July was again socially distanced.  With several regulars on holiday, the six of us present delighted in playing as a consort, one person per part for most pieces. Listening to others playing their parts rather than to others playing the same part as yourself is so important, and a skill that is harder to learn in an orchestra of 20 players.   We recorded a couple of pieces so Rik could practice adding sound to this web page. At the break, we discussed some ideas for future music - rounds (cue an impromptu "Frere Jacques") and from that a wish for Pachelbel's Canon, for which Jonathan has a possible usable arrangement.  Ed brought along  two Renaissance lute pieces, "The Fairie-round" by Antony Holborne (c1545-1602) and Francis Cutting's take on "Greensleeves", both of which Rik will arrange for our future consideration.  Francis was, like Holborne,  an English lutenist (1550-1603), and arranging their lute music for recorder consort will be an interesting challenge.
Interesting fact for the day - How many of us knew that Ed made himself a lute from scratch & is learning to play it?

Ten of us braved Covid, and some heavy Covid precautions and restrictions to enjoy a first run through our new repertoire list.  With no refreshments possible, this was a shorter session but it was lovely to be together again.  Ed briefed us on the subs payable for this quarter, and Ian outlined plans for the coming few sessions. 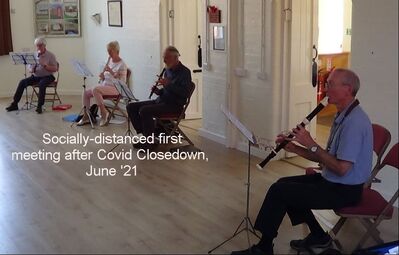 1. If you are not already a member of Southwell U3A but are interested in finding out more about these groups and/or would like to attend one of their group meetings please click on the Contact Us link and let us know which group you are interested in. We will arrange for the Group Leader to get in touch with you as soon as possible.

2. If you are already a member of Southwell U3A and are interested in joining either group you can contact the Group Leader directly. Their details are in the Group Leaders page in our Membership Area of the website. As a Southwell U3A member you will have received the password for the Members Area pages in Newsline.  If you have forgotten the password please use the  Contact Us facility on this website to request the password.